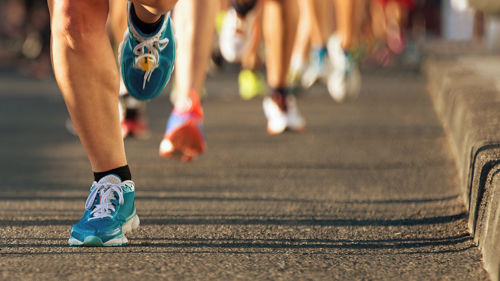 Al Ryder’s most recent marathon was in Mount Airy, North Carolina in the Mayberry Half-Marathon. Running is a hobby the distribution center employee recently picked up. It’s allowed him to travel to North Carolina, but the former Marine has worked his way around the world.

He added that Japan and Norway were two of his favorite stops, “The Northern lights are real pretty, but it’s a lot of snow.”

He was eventually sent to New Orleans, as a helicopter crew chief, and from there he moved to Lafayette. The Monroe native, who achieved a Sergeant Major rank, was happy to be back in his home state.

Al has been with Home Furniture for 12 years and jokes he actually came with the warehouse that is now the Distribution Center.

“Well I was working at the Auto Zone Distribution Center when it was sold to Home Furniture. I was helping close things up and they asked if I wanted to stay on. They joke a lot of times that I came with the building. I mean that was the greatest thing that could have happened to me.”

He says working for the company is wonderful. He likes how involved they are in the community, and loves what he gets to tackle day to day.

“Every day is something different. It’s really busy, and I do a variety of things. I take care of all the power industrial equipment, whatever it takes to keep us going,” explains Al.

Together he and his wife of 49 years, Phyllis, have 3 children, 2 sons and a daughter that is now deceased and 6 grandchildren.
Blog search
Categories
Blog archive